The Holy Father has asked us to pray one Pater Noster at 11.00am UK time (12 noon Rome time)

From a discourse of His Holiness Pope Pius XII, on the canonization of Pope St Pius X. 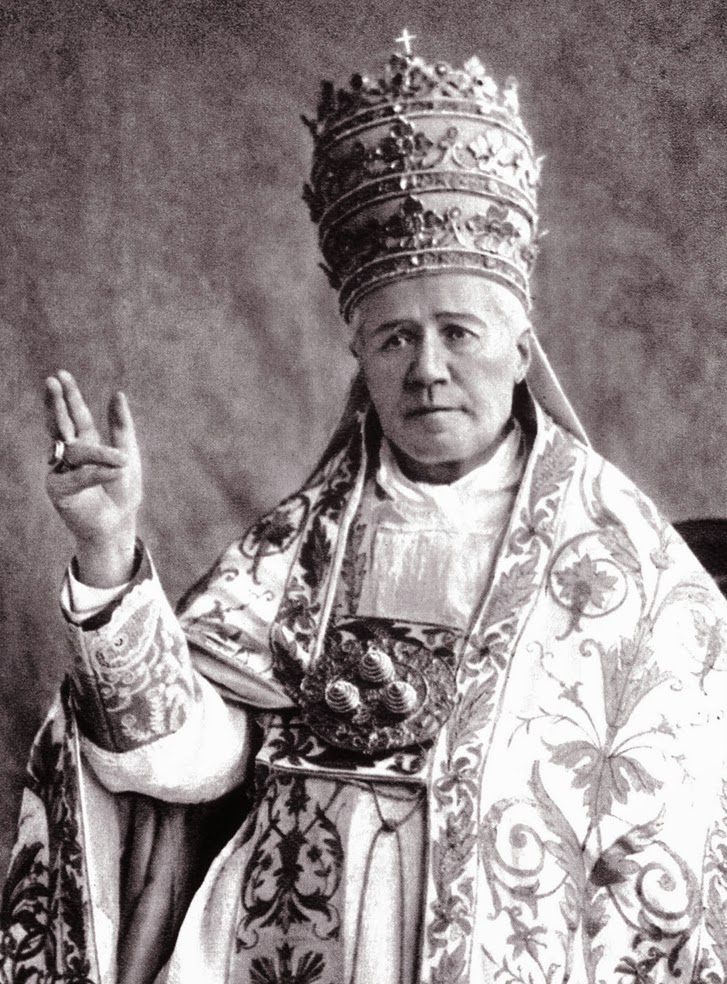 Sanctity, which was the guide and inspiration of the undertakings of Pius X, shines forth even more clearly in the daily acts of his personal life. Before applying it to others, he put into practice in himself his program of returning all things to unity in Christ. As a humble parish priest, as bishop, as the Supreme Pontiff, he believed that the sanctity to which God called destined him was that of a priest. What sanctity is more pleasing to God in a priest of the New Law than that which belongs to a representative of the Eternal High Priest, Jesus Christ, Who left to His Church in the holy Mass the perennial memorial, the perpetual renovation of the Sacrifice of the Cross, until He shall come for the last judgment; and Who with this Sacrament of the Blessed Eucharist has given Himself as the food of our souls: “He that eateth this bread shall live forever.”

A priest above all in the Eucharistic ministry: this is the most faithful portrait of St. Pius X. To serve the mystery of the Blessed Eucharist as a priest, and to fulfill the command of Our Savior “Do this in memory of me” (Luke 22:19), was his way. From the day of his sacred ordination until his death as Pope, he knew no other possible way to reach such an heroic love of God, and to make a such generous return to that Redeemer of the world, Who by means of the Eucharist “poured out the riches of His divine Love for men” (Council of Trent, Session 13, chapter 2). One of the most significant proofs of his priestly sensibility was his ardent concern for the renewal of the dignity of worship, and his concern to overcome the prejudices of an erroneous practice, by resolutely promoting the frequent, and even daily, Communion of the faithful at the table of the Lord, without hesitation, leading children thereto, lifting them up, as it were, in his own arms, and offering them to the embrace of God hidden on the altars. From this, sprang up a new springtime of the Eucharistic life of the Bride of Christ.

In the profound vision which he had of the Church as a society, Pius X recognized in the Eucharist the power to nourish substantially its interior life, and to raise it high above all other human associations. Only the Eucharist, in which God gives Himself to man, can lay the foundations of a social life worthy of its members, cemented by love more than by authority, rich in its works and aimed at the perfection of individuals: a life, that is, “hidden with Christ in God.”

A providential example for today’s world, where earthly society is becoming more and more a mystery to itself, and anxiously searches for a way give itself a soul! Let it look, then, for its model at the Church, gathered around its altars. There in the sacrament of the Eucharist mankind truly discovers and recognizes its past, present, and future as a unity in Christ. Conscious of, and strong in his solidarity with Christ and his fellow men, each member of either Society, the earthly and the supernatural one, will be able to draw from the altar an interior life of personal dignity and personal worth, such as today is almost lost through insistence on technology and by excessive organization of the whole of existence, of work and even leisure. Only in the Church, the holy Pontiff seems to repeat, and though Her, in the Eucharist which is ‘‘life hidden with Christ in God,” is to be found the secret and source of the renewal of society’s life. 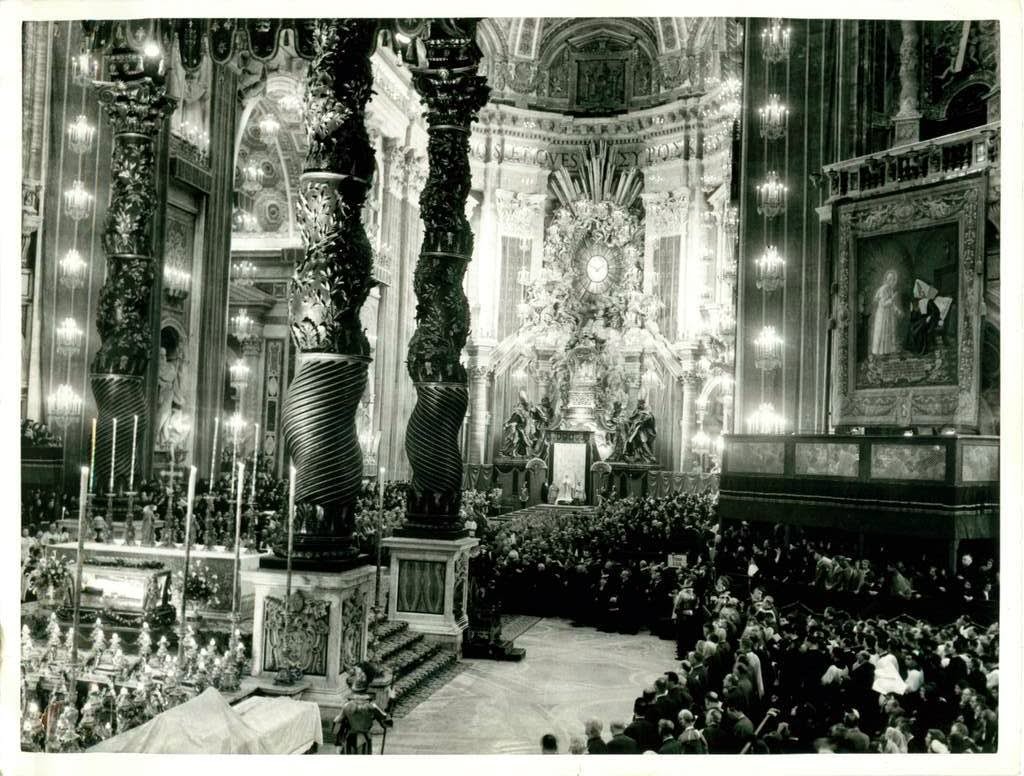 Hence follows the grave responsibility of those who, as ministers of the altar, have the duty of it is to open up to souls the saving treasure of the Eucharist. There are indeed many forms of activity which a priest can exercise for the salvation of the modern world; but only one of them is without a doubt the most worthy, the most efficacious, and the most lasting in its effects: to act as dispenser of the Holy Eucharist, after first nourishing himself thereof abundantly. His work would not be that of a priest, if, even through zeal for souls, he were to put his Eucharistic vocation in second place. Let priests conform their outlook to the inspired wisdom of Pius X, and orient every activity of their life and apostolate by the sun of the Eucharist.

Pope Francis has declared Popes John XXIII and John Paul II saints, in front of a crowd of hundreds of thousands. He praised his two predecessors as “men of courage” at the Vatican service, the first time in history that two popes have been canonised at the same time. The Mass was attended by Pope Emeritus Benedict, who quit as pope last year, and roughly 100 foreign delegations. Analysts say Francis is trying to balance the conservative legacy of John Paul with the reforming zeal of John.
Analysis by Alan Johnston
BBC News, Rome 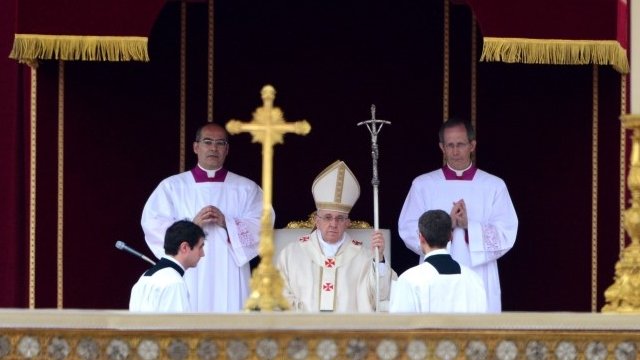 The ancient rite of canonisation unfolded under grey skies in a packed St Peter’s Square. In keeping with tradition, Pope Francis, was approached and requested to add his two predecessors to the long list of Catholic saints. And at the third time of asking, he granted that request.

Then ornate, silver containers holding holy relics of new saints were shown: a trace of blood from John Paul II, and sliver of skin taken from the body of John XXlll. Both men were hugely influential figures in the story of modern Catholicism.

The Italian Pontiff, John XXlll, is seen very much as a liberal, reforming figure. The Polish Pope, John Paul, on the other hand, was much more conservative. And their elevation to the sainthood on the same day is being seen as an attempt to draw together the liberal and the more traditional wings of the Church.

At the climax of the service, Pope Francis said in Latin: “We declare and define Blessed John XXIII and John Paul II to be saints and we enrol them among the saints, decreeing that they are to be venerated as such by the whole Church.”

Relics of each man – a container of blood from John Paul and a piece of skin from John – were placed near the altar.

Pope Francis paid tribute to the two new saints as “priests, bishops and popes of the 20th Century”.

“They lived through the tragic events of that century, but they were not overwhelmed by them. For them, God was more powerful,” he said.

The Vatican estimated some 800,000 pilgrims had poured into Rome to see the two-hour ceremony first-hand.

For those unable to make it into St Peter’s Square, giant screens were set up in nearby streets and elsewhere in the city.

“Four popes in one ceremony is a fantastic thing to see and to be at, because it is history being written in our sight,” said Polish pilgrim Dawid Halfar. 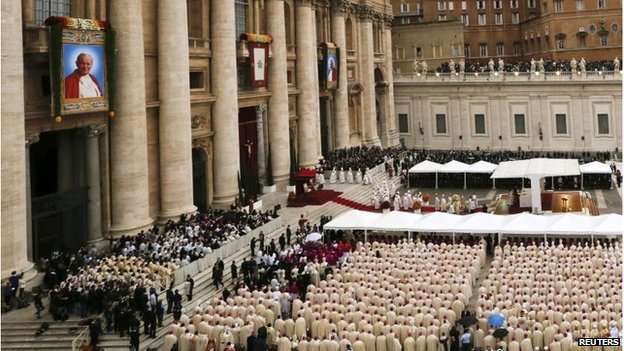 The Vatican confirmed on Saturday that 87-year-old Pope Emeritus Benedict XVI would make a rare public appearance alongside his successor. 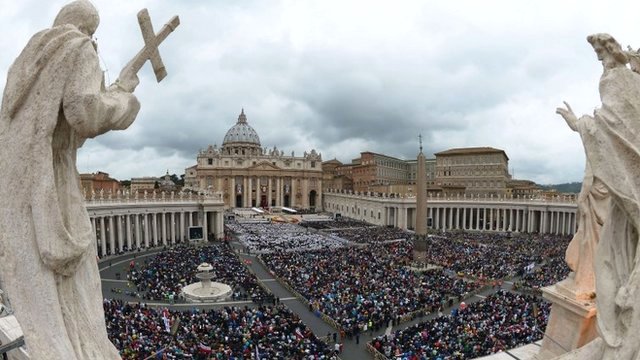 The BBC’s Robert Pigott in the crowd: “This has been a majestic, a solemn and a moving ceremony” 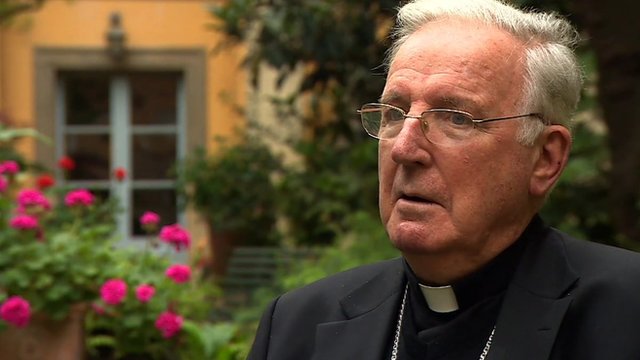 But John Paul II, whose 26-year reign ended in 2005, has been fast-tracked to sainthood in just nine years.

Many among the huge crowds that gathered as he lay dying cried out “santo subito”, which means “sainthood now”.

By contrast Italian-born John XXIII, known as the Good Pope after his 1958-63 papacy, had his promotion to full sainthood decided suddenly and very recently by Pope Francis.

The BBC’s David Willey in Rome says there was a political dimension to this.

By canonising both John XXIII – the pope who set off the reform movement – and John Paul II – the pope who applied the brakes – Francis has skilfully deflected any possible criticism that he could be taking sides.

On Saturday 22nd February 2014, Pope Francis made 19 new Cardinals of the Church. Among the new Cardinals  created today was Cardinal Vincent Nichols, Cardinal Archbishop of Westminster. Pope Emeritus Benedict XVI made a special appearance and received a very warm welcome from the Pope and congregation. Click ‘Read More’ to view the video. The Roman Forum Summer Symposium is a 11-day residential conference with a range of speakers on a coordinated set of topics. This year they are considering the last hundred years, in light of the centenary of the start of the Great War.The Roman Forum is inspired by the ideals of Dietrich von Hildebrand, one of the founders of the Traditional Catholic movement. It is accompanied by the daily celebration of the Traditional Mass. The chief organiser is Dr John Rao, who spoke at the LMS One Day Conference in 2012.The headline price is €2,100. The Latin Mass Society is offering two bursaries of £500 each (currently worth €608), and the Roman Forum may be able to offer one of their own reduced-price places to complement this.

The Latin Mass Society are looking for two young people from England and Wales who would benefit from this conference: a unique Catholic insight into recent history, in the context of the Traditional Catholic liturgy.

Find out more or adjust your settings.

This website uses cookies so that we can provide you with the best user experience possible. Cookie information is stored in your browser and performs functions such as recognising you when you return to our website and helping our team to understand which sections of the website you find most interesting and useful.

Cookies are small text files that are placed on your computer/phone/tablet to help the site provide a better user experience. In general, cookies are used to retain user preferences, store information for things like shopping carts, and provide anonymised tracking data to third party applications like Google Analytics. As a rule, cookies will make your browsing experience better. However, you may prefer to disable cookies on this site and on others. The most effective way to do this is to disable cookies in your browser. We suggest consulting the Help section of your browser or taking a look at the About Cookies website which offers guidance for all modern browsers

Necessary Cookie should be enabled at all times so that we can remember your preferences.

If you disable this cookie, we will not be able to save your preferences. This means that every time you visit this website you will need to enable or disable cookies again.